Anatomy Murders: Being the True and Spectacular History of Edinburgh's Notorious Burke and Hare and of the Man of Science Who Abetted Them in the Commission of Their Most Heinous Crimes, now available as an Audible Audiobook!

For your listening pleasure, The Anatomy Murders is now available as an Audible Audiobook! 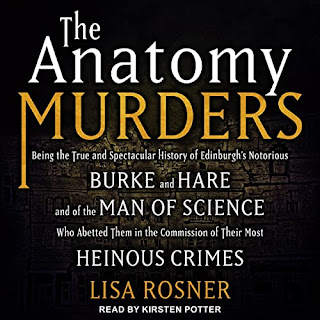 It is beautifully and convincingly narrated by actress Kirsten Potter, whose many other audiobooks include Colm Toibin's Brooklyn and Emily St. John Mandel's Sea of Tranquility, as well as thrillers by Lisa Gardner and Tami Hoag.
Many thanks to E.S Thomson, author of the Jem Flockhart series of historical medical mysteries, for her assistance.
The Anatomy Murders: the Audiobook, is available through Amazon and Audible.


The case of Burke and Hare did not end on January 24 when William Burke was executed. Throughout February, 1829, Edinburgh was repeatedly in an uproar: when a civil case was brought against William Hare, only to be dismissed; when first Helen M'Dougal, then Margaret Hare, then William Hare, required a police escort to protect them from angry citizens as they left the city; when William Burke's Confessions were printed, divulging the number of murders and the impoverished, helpless condition of the victims.

But the most damaging information to emerge from the revelations of February was the extent of Dr. Robert Knox's involvement. As Burke's confessions made clear -- abundantly clear -- Dr. Knox had "asked no questions", leading the Scotsman to state, pointedly, that


while we made ample allowance for professional zeal, rivalry, and esprit de corps, previously to the disclosures brought out by these judicial proceedings, it was impossible afterwards to allow the interests of medical science to be put in competition for one moment with the security of individual existence.


thenceforward no anatomist, or teacher of surgery, would be justified in accepting a body from any one, without being satisfied, not merely from appearances, but from inquiry and from moral, if not judicial evidence, that it had not been criminally deprived of life.

That the cadaver, as the coroner of the Munchkins might have sung, was

The Scotsmen would have had its readers believe that some anatomists might have been opposed to such a proceeding, and perhaps that was a contributing factor to what happened, as the newspaper related, on the afternoon of February 14, 1829:


A number of young men assembled on the Calton-hill, and proceeded to equip a large effigy of an Anatomist who has been rendered very obnoxious

Note the pun on "knox"


to the public by recent events. The figure was dressed in a black coat, raised aloft on a pole, and had a label attached to its back, naming the person intended to be represented.

Mindful of the libel laws, the Scotsman did not itself name the person, but none of its readers would have found it difficult to make the identification. The police were alerted, but still


the mob, with the figure "high in air," proceeded without molestation, shouting, cheering, and increasing in numbers, til the whole southern suburbs seemed in motion.

They made it to Knox's house in the middle-class suburb of Newington,


and a number of lads deliberately proceeded to "Burke" the effigy, amid loud huzzas. Having squeezed and throttled the figure for some time, they tied a rope about its neck, and suspended it from a small tree in the shrubbery before the house, but the branches giving way, the effigy was pulled, battered, and tossed about, and latterly thrown on the top of the tree preparatory to immolation.

By that time the police had arrived, though, and they put a stop to the fire; they were not however, able to stop the rioters from from taking advantage of the "road being newly metalled in the neighbourhood, and using "such a timely supply of ammunition" to smash the windows in Dr. Knox's house and, it was later said, in several surrounding houses.

Dr. Knox and his family were not at home, for he had prudently moved to the seaside resort of Portobello during the trial and its aftermath. We have no record of his feelings, then or later, when he, his wife, children, and sister, returned to clean up the debris and replace the windows.


Such exhibitions can serve no good purpose, and they are at once hurtful and disgraceful to the character of the city,

the Scotsman wrote,  but of course, they made them all the more useful for selling newspapers. 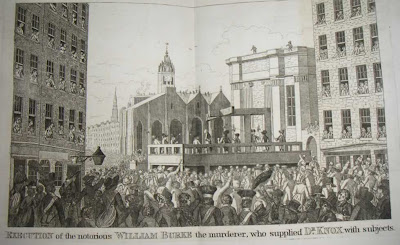 Or is it? Certainly that's what the caption states, and certainly the buildings indicate that the gallows are located correctly on Edinburgh's High Street, in front of Parliament Square, filled with the thousands of residents on hand to witness the execution of Scotland's most famous serial killer.

But according to an eyewitness account by the Professor of Anatomy Alexander Monro, all is not what it may appear. Edinburgh engravers were no fools: they knew that the best time to hawk their wares was right at the execution, when spectators could be relied upon to pay a penny for the souvenir. They therefore made up their engravings ahead of time, picturing the scene as they expected it to be on the time of the actual event. They also kept the face of the condemned man generic, so they could reuse the print for future execution. If we zoom in to the engraving, we can see that it might be anyone on the gallows.

In real life, it was definitely William Burke present at his own execution, and also at his own dissection, presided over by Professor Monro. And Monro took care to remove all ambiguity when he noted on a slip of paper,  "This is written with the blood of Wm Burke, who was hanged at Edinburgh on 28th Jan. 1829 for the Murder of Mrs Campbell or Docherty. The blood was taken from his head on the 1st of Feb. 1829."

What Becomes of Body Parts?

I've been doing a series of radio interviews on The Anatomy Murders: I just completed one with Jean Dean on Viewpoint, WRVC AM, Huntington, W. Virginia, and I had another yesterday on Conversations with Peter Solomon, WIP AM Philadelphia. Of course it's always great to talk about the seamy side of medical history, and I've been struck with how quickly the topic turns to body parts today -- and where they end up.

For those of you who remember the scandal of Alistaire Cooke's remains going missing, but are fuzzy on the details, here's a well-informed piece by Kerry Howley from March, 2007 issue of Reason.com: http://reason.com/archives/2007/02/07/who-owns-your-body-parts/singlepage  When Cooke died of cancer at the age of 94, his daughter arranged for him to be cremated. Instead, his body, like more than a thousand others, was cut open and sold for spare parts. The bones were worth about $7000. An intact, younger, healthier cadaver -- once sliced and diced into its saleable components -- can be worth as much as $100,000.

Burke and Hare in America, or at least New York and Los Angeles

John Landis' Burke and Hare has finally come to America, and it looks to be getting the same kind of mixed reviews it's gotten elsewhere in the world. Neil Genzlinger of the New York Times liked it, calling it a "ghoulish comedy, a droll take on one of the most notorious mass-murder cases of the 19th century." (Read more here). Jason Guerrasio posted a sympathetic interview with Landis, saying that " Burke & Hare proves he hasn’t lost any of the crass humor or gift for creating engaging characters that made him an in-demand director in the ’70s and ’80s."

But Jordan Riefe at TheWrap called it "a lousy basis for a good comedy," (read more) and HollywoodChicago.com gave their opinion in their title: "Unfunny ‘Burke and Hare’ Wastes Top-Notch Cast" (read more).

Lucky viewers in NYC and LA can judge for themselves on the big screen, but the movie was available On Demand in many locations, and I think we can expect a pretty speedy release of a US-friendly DVD.

Thank you Google, for making the following review roundup easier than ever.

'Burke and Hare' review: 'Landis returns after long absence with dark comedyThe Star-Ledger - NJ.com - Stephen Whitty - ‎Sep 9, 2011‎By Stephen Whitty/The Star-Ledger Burke and Hare Films LimitedSimon Pegg, left, and Andy Serkis as grave robbers who become murderers in "Burke and Hare." In the late '70s and early '80s, the director was one of Hollywood's busiest, ...Easy Money From Body PartsNew York Times - Neil Genzlinger - ‎Sep 8, 2011‎When an American director uses a bunch of well-known English actors to tell a Scottish tale centered on two Irish immigrants, you might expect some inconsistencies of tone and accent, and you get them in “Burke & Hare,” so nitpickers ...
'Burke and Hare': Grave Matters, With A Comic Slant
NPR - Ian Buckwalter - ‎Sep 8, 2011‎
All for love: William Burke (Simon Pegg) and Ginny Hawkins (Isla Fisher) live the high life — on proceeds from his low life — in Burke and Hare. It's a match made in cult-cinema heaven — on paper. The co-writer and star of the ...
Review: John Landis' Gravedigger Comedy 'Burke and Hare' Arrives DOA
Reuters - Jordan Riefe - ‎Sep 8, 2011‎
Edinburgh's most notorious serial killers, William Burke and William Hare were a pair of Irish immigrants who terrorized the Scottish capitol in the 1820's. Together they murdered 17 and sold the corpses to medical lecturer ...
Film Review: Burke & Hare
Film Journal - Rex Roberts - ‎Sep 9, 2011‎
John Landis returns with a macabre spoof of Enlightenment Scotland, starring Simon Pegg and Andy Serkis as entrepreneurial serial killers furthering the cause of science…and the arts. The title sounds like the name of a vaudeville act, ...
Unfunny 'Burke and Hare' Wastes Top-Notch Cast
HollywoodChicago.com - ‎Sep 9, 2011‎
CHICAGO – There are few sights more depressing than a game cast all dressed up with nowhere to go and no good jokes to share. “Burke and Hare” is the sort of comedy Mel Brooks was making in the '90s. All the ingredients are on hand for a promising ...
Burke and Hare
New York Post - Kyle Smith - ‎Sep 8, 2011‎
BURKE AND HARE. Running time: 91 minutes. Not rated (blood, gore, violence, profanity). At the IFC Center, Sixth Avenue and Third Street. 'Sweeney Todd" meets Ealing Studios in the so- so black comedy "Burke and Hare. ...
Interview: John Landis Talks 'Burke And Hare', 'Three Amigos' On Blu-ray
Ology - Benny Gammerman - ‎Sep 8, 2011‎
John Landis is a legend. There's no way around it. His voice and films -- Animal House, The Blues Brothers, An American Werewolf in London, Trading Places and Coming to America among them -- have essentially crafted the state of modern comedy. ...
Burke and Hare review
Paste Magazine - Maryann Koopman Kelly - ‎Sep 9, 2011‎
Coaxing a successful comedy out of a dark historical drama is tricky even for the most seasoned filmmaker. Unfortunately, John Landis' comedy/thriller Burke and Hare is one of those that misses the mark. Set it the scientific boom of 1820s Edinburgh, ...

Older Posts Home
Subscribe to: Posts (Atom)
Return to The Worlds of Burke and Hare

Of Medicine, Science, and Murder...